skip to main | skip to sidebar

Retro # 15 - The American Freedom Pyramid: Where It Should Be Vs. Where It Is Today

I will be at an event with family and friends this week so my time to write will be curtailed. Thus, I will be reposting some of our most popular discussions in this blog from the past couple of years for your new enjoyment and review.

This post happened over two years ago but has consistently been viewed by our readers many times over the ensuing years. It graphically portrays how we have let the political class in this country hijack our political processes and the associated freedom that we should all be enjoying in this country. The post lists some necessary steps that all Americans need to take to return to the original concepts of liberty in this country.

The American Freedom Pyramid: Where It Should Be Vs. Where It Is Today

An important part of the book, "Love My Country, Loathe My Government," is the understanding of what I call the Freedom Pyramid. The Freedom Pyramid tries to imagine what our founders had in mind when the put the U.S. Constitution, the Bill of Rights and a government based on individual freedom together. The ideal American Freedom Pyramid fits together as follows:

1.The base and foundation of the pyramid is the Constitution and the Bill Of Rights.

2.Sitting on top of this base level is the government structure that the founders defined to implement the liberty principles and concepts of the Bill of Rights and the Constitution in a limited government manner.

3.This government structure serves all of the country's citizens equally in guaranteeing each person's rights and freedoms as defined by the base level documents.

4.And finally, the pinnacle of the Freedom Pyramid is our own individual rights, freedom, and liberties.

These concepts are graphically illustrated below (you can double click on the picutre to get a bigger, clearer view): 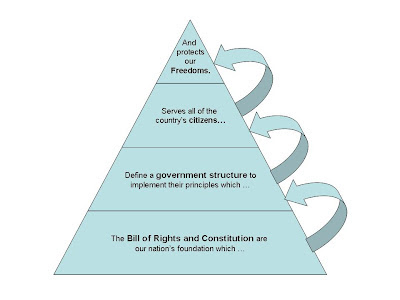 There are a few important characteristics of this pyramid. The power in the pyramid flows up from the Bill of Rights and U.S. Constitution to our individual freedoms which is the pinnacle of our country. Government exists to serve the citizens and the country and is just the mechanics for implementing the tenets in the Bill of Rights and Constitution. Finally, the political class appears nowhere in the Freedom Pyramid structure.

This structure has served the country and its citizens quite well over the past two centuries. Americans were usually the freest people in world, which allowed the country to grow into the most prosperous ever. The Freedom Pyramid concept placed individual freedom above all else, including the government and the political class, whose sole purpose should be implementing the concepts and principles of the Constitution and the Bill Of Rights.

However, over time, we have allowed the American political class to pervert this original Freedom Pyramid concept:

1.Today, individual citizens and their freedom and liberties are no longer at the pinnacle of the pyramid, having been replaced by a self serving political class.

2.This political class uses government functions and institutions to enlarge, entrench, and enrich itself. Examples at this level abound and include earmark abuse, favorable campaign finance laws, Congressional voting district gerrymandering, excessive Congressional benefits and perks, confiscating large amounts of citizens wealth and income via taxes, and a general low priority for the needs and desires of the country's citizens.

3.The political class uses their increased power to divide the country into various and competing tribes and voting blocks of citizens, "energizing their bases" as needed and demonizing those not in their bases or tribes.

4.This increased power of the political class and their abuses of power results in diminished individual rights and freedoms.

These concepts are illustrated in the current day, perverted Freedom Pyramid below, where the only Americans with the freedom and power tend to be our politicians: 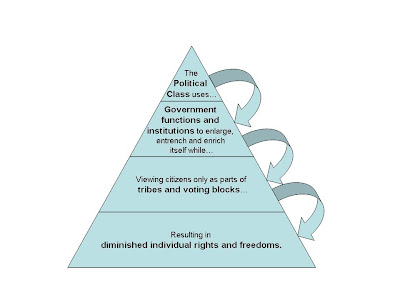 
As you can see in this pyramid, the Bill of Rights and Constitution are no longer vital to this pyramid's structure since the often act as an obstruction to the needs and desires of the political class rather than their original intent, the foundation of the country. Also, the power is driven down from the political class and is imposed on American citizens and their freedom.

We need to recognize how far we have deviated from the concept of the first Freedom Pyramid. The reality of America today is that we no longer live in a free country. We do not get true freedom in our election processes since the political class has rigged the voting process to favor existing officeholders and existing political parties. We do not get true freedom while under our excessive tax burden. When an individual is forced to pay more than 30% of their annual income to all levels of government, that individual's freedom to send his or her kids to a better school or to start a business or to save for retirement or to go on a vacation is severely limited: you cannot have political freedom without financial freedom. We do not get true freedom when politicians call individual citizens racists, Neanderthals, un-American, smelly, and other derogatory names just because they dare to disagree with a politician's programs.

If we ever want to get back to the right Freedom Pyramid, where individual citizens are in charge and the political class and the government the run are subservient, we need to implement most, if not all, of the steps laid out in "Love My Country, Loathe My Government." Some of the most important steps include:

•Step 1 - reduce the size and budget of the Federal government by 10% a year for five years.

•Step 7 - allow only citizens that are affected by an election to contribute to election campaigns within that election. For example, political parties would not be allowed to accept campaign contributions from someone in Kansas and send/funnel that money to be used in an election campaign in New Jersey.

•Step 17 - eliminate the Democratic Party's "Super Delegate" process which has the potential of voiding the votes of all voters who voted in Democratic Party Presidential primaries.

•Step 34 - hold politicians sitting on Congressional committees accountable for their respective government areas of oversight and remove them from their committee positions if that committee falls short of serving the country, e.g. all members of Congressional Intelligence committees should have been removed from those committee posts on September 12, 2001 for their inability to foresee the 9-11 terror attacks.

Many of the other 50 steps are also important but implementing these listed above would go a long way to getting us back to the true and rightful Freedom Pyramid concept for this country.

"We invite all readers of this blog to visit our new website, "The United States Of Purple," at:

The United States Of Purple's website also provides you the formal opportunity to sign a petition to begin the process of implementing a Constitutional amendment to impose fixed term limits on all Federally elected politicians. Only by turning out the existing political class can we have a chance of addressing and finally resolving the major issues of or times.

Our book, "Love My Country, Loathe My Government - Fifty First Steps To Restoring Our Freedom And Destroying The American Political Class" is now available at www.loathemygovernment.com. It is also available online at Amazon and Barnes and Noble. Please pass our message of freedom onward. Let your friends and family know about our websites and blogs, ask your library to carry the book, and respect freedom for both yourselves and others everyday. 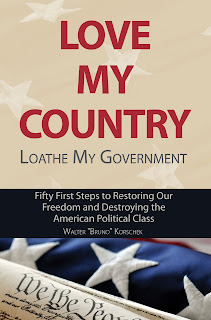