skip to main | skip to sidebar

It is the beginning of another month which means it is again time to review the latest political class insanity from Washington and around the world. Political class insanity takes many forms including the wasting of taxpayer wealth, criminal fraud within government programs, inane and stupid political quotes and actions, the inability to create and implement effective and efficient government programs, stupid and ill performing economic policies and strategies, and other forms of insanity that continue to evolve and surprise and shock us.

So smart that just being months in the job he uncovered some really nasty goings on with HUD:

Not bad for someone the Democrats thought was unqualified for the job. Makes you wonder how much of that half a trillion dollars in bookkeeping errors was siphoned off by criminals, political friends of the Democrats, or just pure wasteful and inefficient government. Also makes you wonder how many more trillions of dollars are also being hidden by “bookkeeping errors” throughout the Federal government bureaucracy.

2) It has always been our opinion that Hillary Clinton,while Secretary of State under Obama, was essentially operating a crime syndicate that probably even the Mafia envied. The syndicate tied together three components:


Proof and examples of how this crime syndicate worked was recently uncovered by Judicial Watch which forced the government to release Clinton State Department emails via a Freedom Of Information Act request, as reported by Kyle Becker, writing for the Independent Review website last month:

The perfect crime syndicate set up.

3) California is not in good fiscal shape, It has unfunded liabilities in the hundreds of billions of dollars. It has high levels of short term and long term debt. It has high levels of poverty and its schools and infrastructure (streets, dams, bridges) are in horrible shape. One would hope that the state political class would be doing all it could to help its legal citizens get better services from the state government.

But as always when dealing with American politicians, hope is a concept that never materializes. According to various news reports:

Okay, that’s my rant for the day. Citizens getting shortchanged in California, rich people get valuable favors from a high ranking government official, and Federal bureaucracy bookkeeping errors that likely costs American taxpayers untold billions of dollars every year. More insanity to follow.


Our book, "Love My Country, Loathe My Government - Fifty First Steps To Restoring Our Freedom And Destroying The American Political Class" is now available at:

It is also available online at Amazon and Barnes and Noble. Please pass our message of freedom onward. Let your friends and family know about our websites and blogs, ask your library to carry the book, and respect freedom for both yourselves and others everyday. 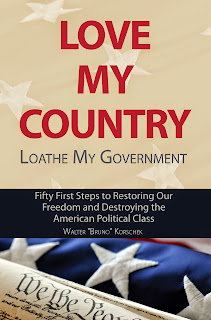